Feel the breath of Siberian taiga!

Taiga… This word has something mystical in it.

Taiga is deserted deep forests spreading over hundreds of kilometres.

This is severe conditions where temperature jumps reach about 100 degrees.

You already know that the strongest and the most adapted representatives of flora grow and survive in taiga. Here one can find truly unique plants having great power.

The specialist of the TianDe Corporation selected the best of them and created a whole line of products called Dr. Taiga.

A special place in this collection is taken by oral hygiene products which allow anybody feel the breath of Siberian taiga.

Natural whiteness of the smile!

Smile more and wider because you have so many reasons for it! One of them is your ultrawhite smile! If it is not so, you can correct the situation using the whitening plant toothpaste out of Dr. Taiga collection.

The whitening herbal toothpaste with charcoal and taiga herbs has a rich black colour, and its regular use will help restore the natural shade of teeth.

Due to charcoal and other components it:

The toothpaste contains no fluorine!

Natural extracts give the plant paste a pleasant natural fragrance.

Components for natural whiteness of the smile

Silicon dioxide is a soft modern abrasive that does not scratch or damage the enamel, at the same time ensuring improved cleaning and polishing properties.

Juniper extract is a natural “sterilizer” that has powerful antiseptic properties and gives a pleasant smelling breath.

Suitable for daily use

One of the most widespread aesthetic problems related to various population classes is the change of tooth colour (scientifically called dental discolouration).

There are a lot of reasons for it: incorrect care, bad habits, consuming certain medicines, food products and drinks. The colouring pigments may get into the tooth enamel and cause their colour change.

It is possible to lighten the enamel a bit due to daily hygienic cleaning (this way we just remove the surface plaque and colourants). But most often whitening pastes are used to deal with such problems. Many manufacturers use high-abrasive additives (with hard particles) for whitening. The larger the particles are, the higher the abrasive is, the better cleaning properties are and the higher the injury rate of hard dental tissues is. This means that this option supposes mechanical abrasion of enamel and dentin. Such products are not fit for daily use, not to mention those who have sensitive enamel.

Whitening plant toothpaste with coal and taiga herbs from the TianDe Corporation is delicate cleaning!

Due to containing soft abrasives and charcoal powder the plant paste influence the enamel as softly as possible and is ideal for daily use.

The plant paste from TianDe contains soft modern abrasive, which is silicon dioxide that does not scratch or damage the enamel, at the same time ensuring improved cleaning and polishing properties.

The cleaning and polishing effect is increased by fine charcoal powder which at the same time works as an absorbent.

Charcoal is a perfect product that returns natural whiteness to teeth. The history of using coal for such purposes runs deeply. During the balls of past centuries charming ladies thoroughly rubbed small particles of charcoal into tooth enamel in order not to hide their smile behind fans shyly and then showed their pearly teeth.

Coal has two effects: sorbing and abrasive. The particles of the substance gently clean tooth enamel without damaging it. Plaque removed by abrasive rubbing is absorbed by coal particles. An important and pleasant thing is that the whiteness of tooth enamel is returned due to natural cleaning instead of chemical whitening.

The action of the plant paste is increased by specifically selected herbal blend based on taiga plants, as well as by colloid silver. The extracts of bergenia, sage and juniper, acting as a complex, strengthen and calm the gums, improve their conditions in case of periodontium problems, prevent caries and make breath fresh, and colloid silver among the ingredients prevents bacteria development.

Colloidal silver has prominent bactericidal, antiviral, antifungal and antiparasitic activity. The particles of silver that have antibacterial properties prevent the development of caries, bleeding in the gums and inflammation of periodontium tissues.

Colloidal silver is a suspension of microscopic silver particles in distilled water. It was known as a natural antibiotic some centuries ago, for our ancestors used silver coins to preserve various products. As the latest researches show, colloid silver is able to prevent the growth of viruses and bacteria that are the most resistant to antibiotics.

Bergenia extract was used since the ancient times for rinsing the mouth in case of stomatitis, tongue and gum inflammations, stomatocytosis, periodontosis and sore throat. It is extracted from a plant that the botanists call leather bergenia (it was called this way in the XVIII century by the famous Swedish physician Carl Linnaeus; the plant was sent to him from Petersburg). Bergenia got to the capital of North Russia from Siberia where it was used for the purposes of traditional medicine for ages.

Bergenia is widespread in mountain and forest areas of Siberia, Altai and the Sayan Mountains. In folklore it is often called Mongolian tea. Like most medicinal plants, bergenia has complex chemical composition, in which the most important role is played by tanning substances, glycosides, phytoncides, glucose, saccharose, ascorbic acid, iron, manganese and copper.

Juniper extract is a natural “sterilizer” which has powerful antiseptic properties and gives a pleasant smelling breath.

Plant toothpaste spreads and foams well (which means that it is economized; you need a pea-sized amount per one use) and cleans excellently, leaving the feeling of freshness. An important thing is that the product is easily cleaned off the sink surface despite its black colour. 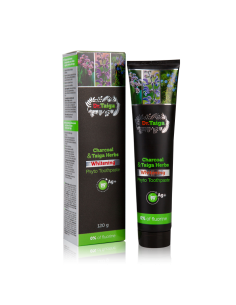