Apply the shampoo evenly to damp hair, leave on for 2-3 minutes and rinse.

Recommended for weak and fragile hair. Helps with hair loss.

Ginseng is surrounded by many legends. A legend says that it comes from lightning. The moment lightning reaches clear water spring, it enters the earth and there grow this plant. Ginseng carries the full force of heavenly fire. It was used for the treatment of plague, cholera, smallpox, to chronic fatigue and even psychological problems.

Another legend says that once lived a knight named Shen Zhen who was forced to fight his sister's boyfriend. Shen Zhen died in battle. His sister wept for a long time and in the place where her tears fell, an unseen flower grew (Ginseng), a mysterious life force.

One myth says that at night it shines during watering with a strong white light. If you pull the roots while it shines, the plant can even raise the dead. Access to this plant is extremely difficult because it is guarded by a dragon and a tiger. Only the very brave dare to go to fulfill this task.

Another legend says that this plant has become the most beautiful girl named May, prisoner of the king.

Ginseng has not arrived in Europe until the seventeenth century.

It contains a number of active ingredients:

TianDe has used Ginseng as main ingredient and it can be found in products for dry and sensitive skin, anti-aging products, hair products and bath products. 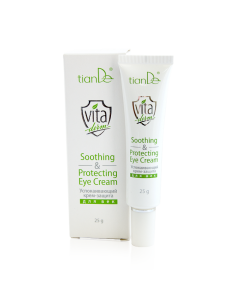 16302
17,75 £
Soothing & Protecting Eye Cream Phyto-protection for the most sensitive zones